This guide will teach you about the different fractions that occur within a pot still distillation and how and when to make cuts thus allowing you to control the end flavor and quality of the spirit. 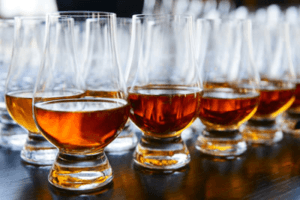 Cuts are predetermined points during a distillation run where a stiller will separates product coming from the still into separate containers. The end result is several different jars of product. Each having an individual flavor and abv.

How to know where to make cuts during distillation run ?

In order to determine where to make cuts when distilling you need to understand the different fractions of a run and learn how to recognize them during the distillation.

Fractions are the individual components of a mixture of compounds that can be divided during phase transition. In our case fractions can be separated during the distillation process.

You can identify fractions using either still head temperature, by abv % or by taste this comes with experience. In any case once you learn how your still performs identifying fractions becomes predictable. Also keep in mind that during distillation still temperature rises and abv drops, they are directly related to each other and are an indication of what is coming out of your still.

Below is a list of compounds present in your wash and their specific boiling points. This gives you an idea at what temperature certain alcohols start to vaporize from the wash.

When distilling with a pot still it is often desired to make several stripping runs before doing a final product run. This saves time and makes blending easier. If your interested in learning more about how to distill a stripping run check out Fundamentals of Distilling A Stripping Run.

What are the main Fractions that occur during the distillation of moonshine ?

There are four main fractions to be conceded with these include:

If your a newbie distiller and are just learning how to make cuts I’d recommended making the main cuts between heads to hearts, and hearts to tails. Get comfortable with this first before you move on to blending. If your comfortable with making these initial cuts then check out the Blending guide for Newbie’s. It will walk you through the process of blending whiskeys and rum for first timers.