When distilling alcohol it is important to monitor the temperature of vapor being condensed within your still as this will tell a lot about the product that’s coming out of your pot or reflux still. Here are some boiling points of common products contained in your mash in Celsius and Fahrenheit

Boiling Temperature – Affected By Concentrations Within The Wash

This can be seen by installing a temperature gauge in your boiler and measure the temperature of your mash as it boils. Note the temperature when your still starts producing ethanol will be far higher then the boiling point of Ethanol.

To Illustrate this I’ve added a chart below that show’s the boiling temperature of ethanol as a function of concentration of ethanol within your wash. 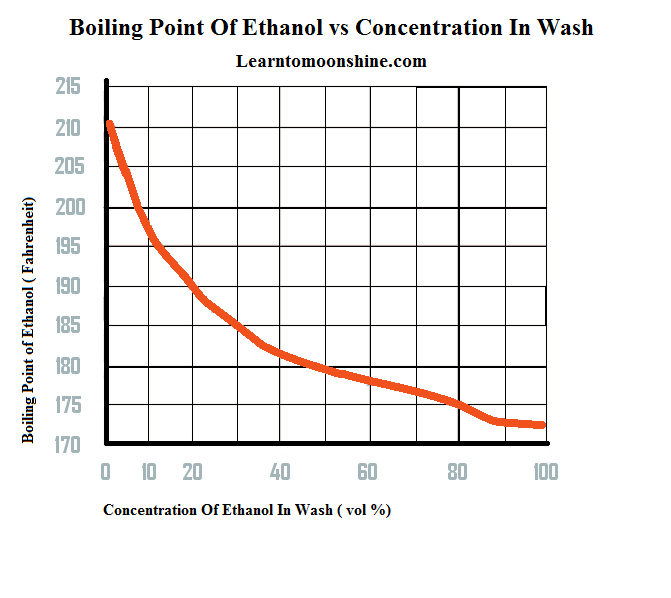 If you want to know the percentage of alcohol in your mash so you can determine boiling temperature of your mash read our post: How to Measure alcohol content in Mash Using A Hydrometer

Knowing when to start collecting moonshine from your still and when to finish is very important. You will often start to see some product dripping from your still when the Head / Column temperature reaches 56 Celsius.  But generally the temperature range that you want to collect  Moonshine within is between 78-82 °C  and we generally stop collecting the distillate once we start getting fusels coming out. This is generally happens at a head temperature of 94 °C or higher.

To Learn more about the process of Making Moonshine Head over to our Distilling 101 page.